If you want to perform accurate velocity or turbidity profile measurements on laboratory setup or industrial pipes, the UB-Lab is designed for you. Because it can control a wide variety of external transducers, it fits many purposes: flow visualisation in opaque liquids, flow metering in complex geometry, food quality control, concentration measurement, etc.

If you want to study and to monitor open channel, sewer flows or rivers, the UB-Flow is made for you. With its hydrodynamic and compact design, the UB-Flow is a fully integrated probe adapted to harsh environments. If the channel it too small, we will recommend to use the UB-Lab.

The UB-Flow is meant to measure in mainly horizontal flows. The most simple installation is to put the UB-Flow in the bottom of the flume. The UB-Flow has to be oriented in the main flow axis, the transducer “listening” towards the water surface and the head of the UB-Flow (side with the transducers) towards upstream.

It is also possible to attach the UB-Flow on a flume wall for example (side looking), measuring then horizontally.

Installation on a floating board is also possible for down-looking setup.

Yes, but the material of the wall is of great importance. To optimise the propagation of ultrasounds, the material should not contain particles nor fibers and in particular its acoustic impedance should approach the one from the liquid in which you want to measure. The greater the difference, the less the ultrasound will be able to penetrate into the liquid. It is very easy and common to measure through plastic walls for example.

Also, as high frequency ultrasounds does not penetrate air properly, any air layer or big bubble across the acoustic beam should be eliminated. This is why, when measuring through a plastic wall for example, the user has to put ultrasonic transmission gel between the transducer surface and the wall, making sure the gel layer does not contain bubbles. And when measuring through a wall, it is recommended to activate the static echo filter.

Our transducers can be immersed in water. They resist at temperatures between 0 and 40°C, and a pressure up to 10 bars.

If you are using other liquids than water, you should check with us if they are compatible.

No, at the emission frequencies we work with (0.8 to 10MHz), the ultrasound does not penetrate air properly to do measurements.

For detailed informations about the influence of a particle’s characteristics on the recorded RMS (root-mean-squared) voltage of the backscattered signal, you can have a look on this article and this thesis:


Usually, the natural particle contamination of water is sufficient for UVP Monitor measurement. But if the medium is too clean or if you want to improve your measurements, you can introduce tracing particles in you flow. These particles can be from a little bit mud in hydraulic models for example. But there are also artificial particles you can use: glass spheres or polyamide particles. If you are lost, you can have a look on the particles selected by Ubertone.


Basically, when you choose your particles, you will be able to choose their size, density and shape. And usually, you want to have influence on the size, on the sedimentation velocity and on the acoustic impedance of the particles.


The particles should have a low Stokes number to follow the flow, ...

where µ is the dynamic viscosity of the medium, r is the particle radius, g the acceleration of gravity and

the mass density difference between the particle and the medium.
Small size and a mass density as close to the medium’s as it is possible lead to a small sedimentation velocity.


... they should have an acoustic impedance that allows to have a good amplitude of signal ...

Le acoustic impedance of a matter is given by

where c is the sound velocity in this matter and the mass density of the same matter. The amplitude of the signal scattered by the particle depends on Zpthe acoustic impedance of the particle matter and on Zmthe one of the medium:

and if the medium is water,

where d is the particle matter density.
This means it is actually the difference of mass density and of sound speed between the medium and the particle that leads to more signal.


… and they should be big enough to be seen by the ultrasounds.

We know that the particles should be equal or smaller than the wavelength of the ultrasound wave. But if they are too small, they won’t scatter enough to be seen by the transducer. There is no magical formula to calculate the minimal size given the wavelength. Arbitrarily and given our experience, we could say that 2% of the wavelength should be a good limit.


Ubertone has selected and characterised polyamide particles which fit perfectly to our devices and transducers. For more information, you can have a look at the particles product page.

When measuring the velocity by coherent Doppler method, the visibility may be limited by the presence of ghost echoes (or phantom echoes), i.e. echoes from a previous pulse. In this case, it is possible to filter them by using pulse coding method which is part of a unique technological system devised by Ubertone.

If you are using the UB-Flow for the first time, you can follow the tips below.

The most simple way to set the UB-Flow up when you start using it is to use our web interface. You can activate the “help” option by going to the “preferences” page.

You are ready to measure!!

WARNING: To measure acoustic turbidity, the setup is different.

The velocity measurement by coherent pulsed Doppler technique gives an excellent spatial and temporal resolution combined with a very good accuracy, thus in a given limit of velocity range.

The repetition of the ultrasonic pulses gives a precise measurement of the Doppler phase in a small cell (or volume of fluid). Nevertheless, this approach induces a limitation of the velocity range for a given exploration depth. Thus, the pulse repetition period defines on one hand the exploration depth (all the echoes will have to come back from the medium before the next pulse is sent) and on the other hand the interval for the determination of the Doppler shift (between -π et +π and proportional to the velocity). When the interval between two successive pulses is too long, the measurement suffers from a phase jump inducing an ambiguity. On a frequency point of view, this is equivalent to overstep the limit given by the Nyquist-Shannon theorem.

Thus the instantaneous velocities (in green) are reduced in negative values when they overstep the highest limit of the range. 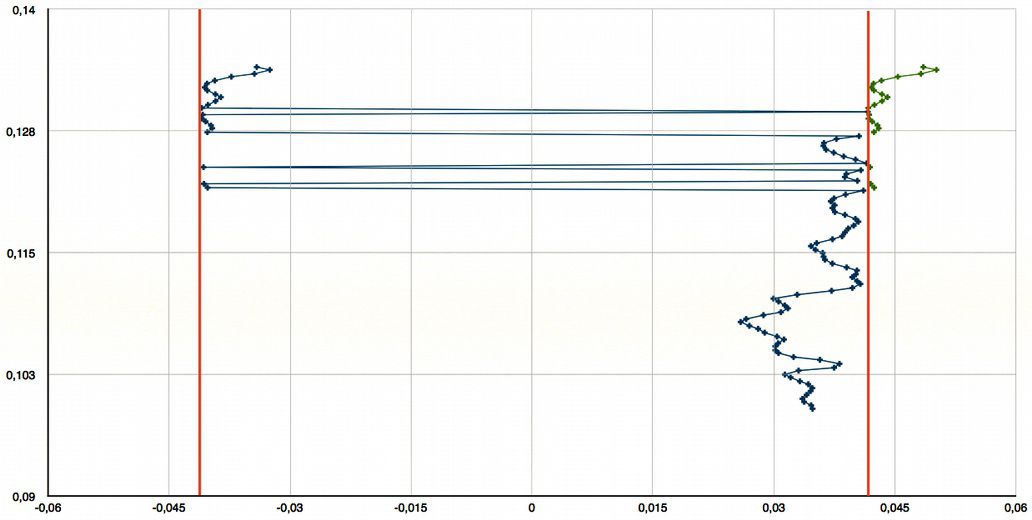 The velocity range for the projected velocities (as measured by the device) is given by:

with: PRF the Pulse Repetition Frequency, c the sound speed (about 1480m/s in water), f0 the emitting frequency.

Pulse coding is a unique technique implemented in Ubertone’s profilers that removes the effect of parasitic noises on the velocity profiles.

These parasitic noises may be of several kinds:

Ghost echoes (also known as phantom echoes in ultrasonic testing) come from intense scattering area or reflection on walls or objects. They particularly occur when working:

When any of these noises has a frequency signature (and it is usually the case), a standard profiler will interpret this as a Doppler shift and will cause an important bias in the velocity profile. This is shown by the red profile on the graph below where a ghost echo introduces an error in the velocity measured in a closed pipe. When the pulse coding is activated, these noises are not taken into account by the signal processing of Ubertone’s profilers so that the estimated velocity corresponds accurately to the velocity of the flow at the given position (green profile in the graph).

This technique is part of the intellectual property of Ubertone. Each emitted pulse is coded. This allows the receiving electronic to distinguish the signal coming from the last emitted pulse from any other parasitic noise. If the energy of the parasitic noise is too strong compared to the energy of the signal, the standard deviation of the velocity measurement will be affected. In this case, the affected velocity points can easily be removed by using a threshold on the SNR (Signal-to-Noise Ratio).

When a cell (i.e. single measurement volume) contains both a static wall (or any motionless object) and moving particles, the estimated velocity will be the average between the wall velocity (which is zero) and the particle velocities (considered equal to the liquid flow velocity). This average is weighted by the energy of the respective echoes. As the echo of a wall may be much stronger as the echoes from scattering particles, the wall will introduce an important bias in the velocity estimation.

The static echo filter implemented in Ubertone’s devices is a numerical processing that removes the effect of motionless objects in order to get only the velocity of the moving particles.

This filter is very useful when measuring through a wall.

Ubertone’s devices are equipped with an automatic gain control algorithm that optimizes the gain over the full observed window with a logarithmic law. It is thus recommended to limit the number of cells to the area of interest so that the gain is well adapted to this area (and not influenced by the echoes after an interface for example).

The transducer emits a pulse (short burst) of a specified duration into the liquid. This ultrasonic pulse consists of several periods at the carrier frequency (emission frequency) within the bandwidth of the transducer. By traveling into the liquid, the pulse will form an acoustic beam.

This acoustic beam (for a round transducer) is firstly contained in a cylindrical shape in said near field, in which the energy has a complex distribution. This cylinder has a diameter D defined by the active part of the transducer. The beam then takes a conical form in the region of the far field, where the distribution of the acoustic energy is more uniform. The limit between the two regions is defined by the near field distance (rnf) that is set at the largest peak furthest from the transducer:

The geometric transition between the cylindrical and conical shape of the beam takes place at about 1.6 times the near field distance.

The turbidity (the cloudiness of water) is due to the presence of suspended matter or sediments composed by organic and inorganic particles, flocs or vesicles.

This is part of Ubertone’s philosophy : a scientific instrument shall measure data without any assumption on the medium in order to provide reliable information.

Thus, we choose to separate clearly measurement from specific processing. On one side we provide instruments that measure profiles (velocity, SNR, echo and acoustic turbidity). On the other side we provide a set of processing tools (cloud.ubertone.eu) that allow the user to visualize, analyse and post-process their data.

As a lot of options are available, our profilers prices depend on which options you need, depending on your application or setup. The price of our standard profilers (UB-Lab (UVP), UB-Lab (ADVP) and UB-Flow) can vary between 18500 and 53000€. The price of our OEM profilers depends on volume.

If you did not find what you are looking for, feel free to contact us.